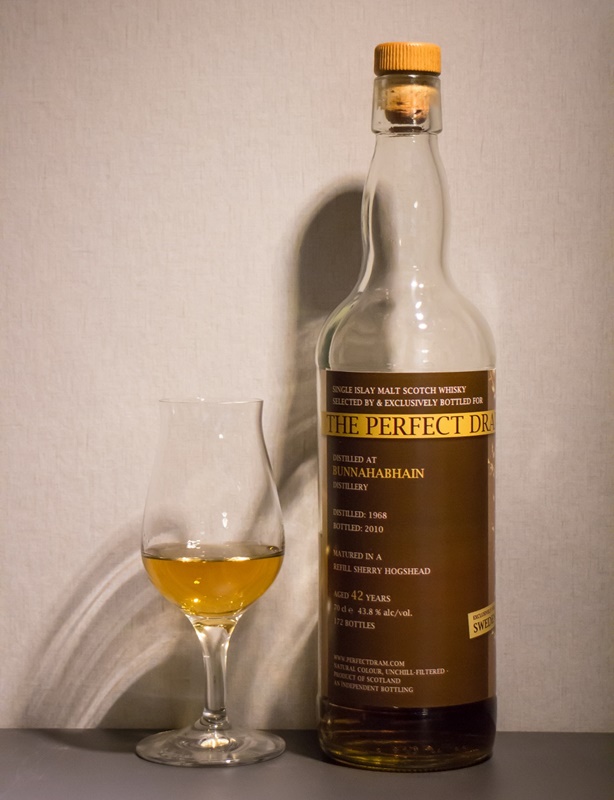 Alright, so there's not a lot going on here. It's faint, and hardly a trace of alcohol. The little aromas that escape come in the form of peaches and brine. I'm usually quite frugal with water in my whiskies, but I'll definitely add some later and see if the magical and diffuse "opening up" takes place. With water and time: Oh yes, that's clearly a little more bite. Nice! A bit more fresh fruit as well, along with some shortbread.

Not at all as closed and timid as the nose would suggest. Instead a small kick of heat and a big dose of fruit at first. Orange marmalade. Lots of marmalade, actually. Very soft, very nice. It takes a few seconds for the whisky to show its true self, but then arrives the massive thickness. Oily. Chewy, almost. With water: Took the edge of the kick, sadly. Brought a bit more pepper into the mix.

Still very thick and oily. A ton of wood as well - not too far from licking pure timber, but without the roughness and splinters. Long, very long. The fruit and spices don't stick around, but the mouthfeel certainly does. After a good while (several minutes) it feels like I'm gargled my mouth with rapeseed oil - not much whisky taste left.
First, something additional about the appearance. Comparing the color to the standard whisky color scale was surprisingly hard as the light rays passed through the liquid in an unusual way. This thing is thick. Given the distillery and the age, I'm not surprised. It's an oily whisper. Maybe a bit tired and not that exciting, but a super fun and very different whisky for sure. Not something if you're in the mood for a lively dram. For what it, absolutely a great whisky. An interesting observation is that I think adding water make the nose open up a bit more, but closed down the taste. Maybe it needs a bit more tweaking, but I think it's safe to say that water makes stuff happen here. Anyway. Are there better whiskies out there? Absolutely. Are really old whiskies cool? Absolutely. Any questions? No? I'll see myself out.