Battle of the Bunnas - Part 1 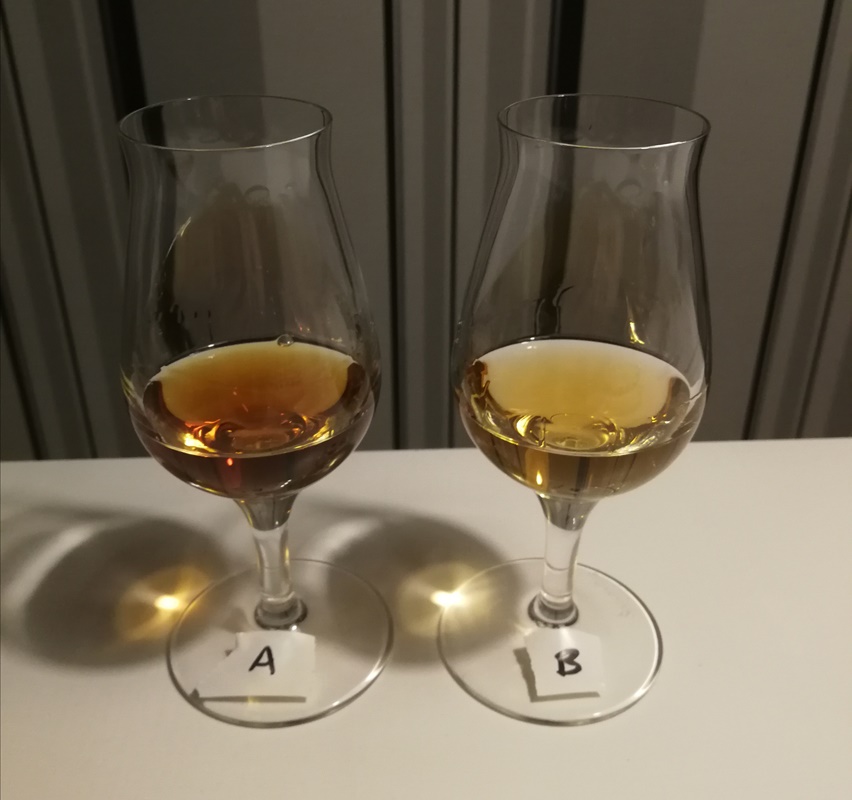 It's hard work, but someone has to do it. This is a head-to-head comparison between two versions of Bunnahabhain 25, done as blind as possible. The combatants are the original "XXV" version and its successor that was produced between 2017 and 2019. Two glasses, I didn't know which was which. Two reviews, written from extensive notes. All references to the other whisky was added after the actual tasting, as they were know to me as just "A" or "B" during the tasting. This is part 1 - read the review of the newer version here
The XXV was bottled in 2012, and the newer edition was bought in 2018.
1.6, mahogany, noticably darker than the newer version.

Alright, so there is tons going on here. A deep, intense nutty sensation hits me first - usually a clear sign of heavy sherry influence. Sure enough, dried fruit and a round spiciness quickly follows. Boat varnish and faint cigars. Apricots are there for sure. Dried tea.

By far the waxiest mouthfeel I've ever experienced. This is like licking a honey scented candle. Oil and was from first contact. Deep dried fruit flavors and some delicious leathery stuff happening.

A coating of the waxiness is left on the lips for quite some time. The finish itself is long, ripe with apricots. Leaves a lingering dryness, with a tugging sensation in the corner of the mouth.
First of all - these are both great whiskies, no doubt. I've had the 2017 before and it's been one of my personal favorites. With that said - these are also two quite different whiskies, and the XXV simply takes it to another level. It's one of the best drams I've tried so far. Compared to the 2017 edition, the XXV is more intense and considerably heavier on the sherry, while the successor is fruitier (pears, mostly) and less dry. For the nose, I'd say that the XXV wins on both complexity and intensity without being too much. The spiciness is round and nice, and there is just so much fantastic flavors coming out of the glass. On the palate, the XXV takes the baseline waxiness and doubles it - in a good way. Both delicious, but the older version more so. The whiskies converge even more on the finish, as both have that waxy, long ending. No one is leaving disappointed, for sure. When comparing these head to head (a very pleasant experiment, of course), it's like comparing a purely sherry matured whisky to a all-bourbon cask whisky, at least on the nose. They probably has both sherry and bourbon cask influence in them, but I'd be very surprised if the sherry cask contents weren't toned down considerably when changing batches. Either by pure contents, or by means of cask activeness. The XXV is a leathery, waxy sherry beast while the 2017 is a fruity, waxy balanced dram. XXV wins with a clear margin. One should note that the XXV probably has batch variations in itself, as it was running a few years. That said, my conclusions seems to be in line with what others are saying, so I'm still pretty confident in calling XXV a winner. This is part 1 - read the review of the newer version here