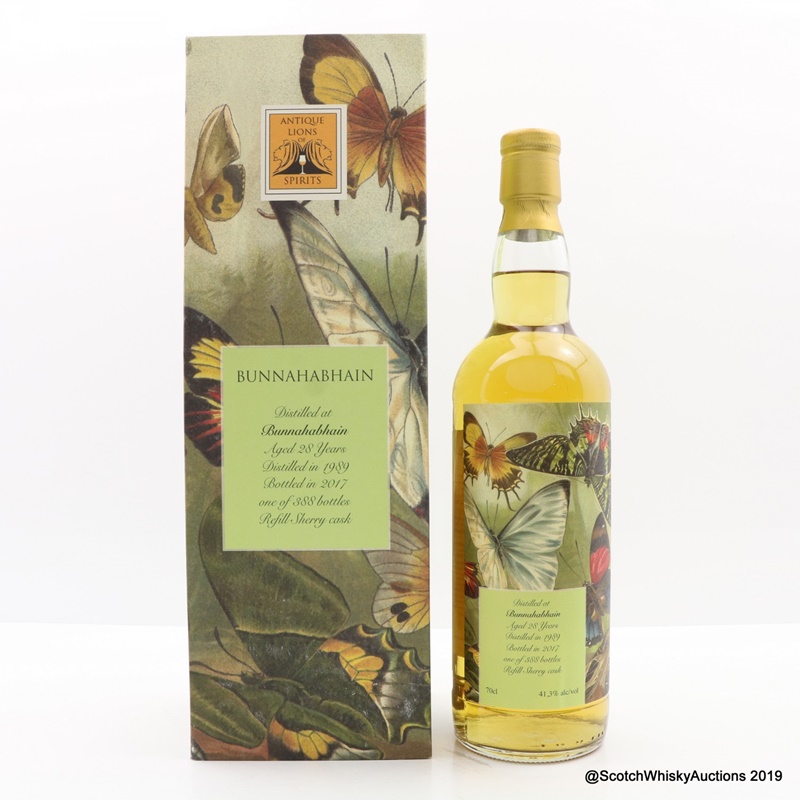 Image used with permission from www.scotchwhiskyauctions.com

Found a sample of this in Sample Cupboard of No Shortage, and I couldn't resist trying the oldest Bunnahabhain to date (for me). The standard 25 year old is a magnificent whisky, so what could go wrong with three more years? I've never heard of the bottler Antique Lions of Whisky either, at least the label on the full bottle is beautiful. This is part of the "Butterflies" series, by the way. Also - I've never had a Bunnahabhain with an ABV this low, so what's up with that? Someone made the decision to bottle this at 41.3%, so I'll try not to judge the dram by the strength (or lack thereof).
0.5 (Yellow gold) - quite light for a 28 year old refill sherry cask.

There's some typical sherry stuff there for sure - but also something else. It's a little salty, it has some dry tea notes alongside dried fruits and a bit of citrus. Pleasant!

Very light mouthfeel, and no burn at all. Tastes not much like a sherried whisky, but rather bourboun-cask-y. Vanilla, fruits and citrus. A little dry with tiny licorice hints.

It's gone as soon as the whisky leaves the tongue. There's just nothing, really.
I really really wanted this to not suffer from a low ABV, as it's a cliché I personally dislike when reviewers misuse. It's far too easy to dismiss a whisky because it's close to 40%, and a lot of times it just seems lazy. But here we are - this starts off very nicely but then falls short. There's not much happening, and the whole thing just feels watered down. I'm confident that I would never put this at 28 years old sherried whisky if done blind - more like a standard 12 year old entry range bottling from a bourbon cask. What a waste. That might not be the ABV's fault alone, of course. Could be a bad sample, could be a bad day for me. Anyway - decent, but not much more.

Image used with permission from www.scotchwhiskyauctions.com